Speech Therapy can put your life back on track

Maslow’s law of basic human needs puts “Social needs” right at the center of the pyramid. This is where every human being needs to communicate with each other to survive and exist. The sense of hearing, combined with the ability to speak, enables us to interact successfully with our surrounding environment. However, like any other sensory ailment, if any one of these gets impaired due to any reason, complications begin to arrive in the human’s very existence, and things may take a psychological turn in extreme cases. This is where medical science comes in with what is known as speech and language therapy.Many of these ailments in children and adults can be cured by speech therapy treatment .

Before delving further into this topic, have a look at what a speech disorder actually is and when to opt for speech therapy.

As the name suggests, Speech disorder is a form of communication disorder where a human being is unable to speak ‘normally.’ The most common ones are lisps and stuttering and are quite common in children during their development stage. The other two forms are known as apraxia and dysarthria – motor neuron disorders caused due to brain or muscle damage.

Medical studies have listed the following as the leading causes of speech disorders, both in children and adults alike:

Irrespective of the cause, psychological effects are the most direct impacts that a person faces. Speech Disorders lead to low self-esteem due to disrupted communication and cause unattended depression in most cases. Speech and language therapy is a process where the person is put through various layers of treatment to restore his/her normal speaking form.

When to go for speech and hearing therapy?

Speech Disorder can arrive in any of the two forms:

And both of these lead to language and speech disorder. As with any other disease, detection is probably the most difficult step. You must opt for a speech therapy treatment if any one of the following complications arises:

Even hoarseness of your voice can be an indication of an inception of speech disorder. This is caused by vocal cord nodules or paralysis and may lead to loss of voice entirely in extreme situations. This scenario calls for a speech and language therapy due to two reasons:

Speech and hearing therapy helps to overcome all these situations and restore normalcy. It goes without saying that each condition has its own set of remedies. There are numerous centers for speech therapy in Dubai who has speech therapist from India and other parts of world,to cure all these speech related issues.When you choose a therapy center make sure the speech therapist has very good experience in treating children with similar issues and similar age group.

Presently, depending on the cause and level of speech disorder, there are a number ways through which this disease can be treated. The common ones are:

This involves a synchronized coordination of speech mechanics combined with social use and meaning of language. A Speech and language pathologist addresses a person’s verbal challenges and sets a set of goals to achieve. This may include:

In speech and language therapy for children and adults alike, the Speech pathologists mainly take one-to-one or group sessions depending on the situation. Various conditions can be dealt with this. There may be an instance where a person loves to interact but is unable to express adequately. In another occasion, a person may not speak at all. Speech-language therapy is effective in both these situations.

Going by speech language pathology, people with autism of the non-verbal type can benefit a lot from this. One form of AAC is known as Picture Exchange Communication System or PECS where an instructor develops a person’s skill by exchange of pictures. These can come from everyday magazines, newspapers or popular books.

Based on this visual activity of distinguishing pictures, a person develops his/her verbal skills. Recent technology has enabled the use of computers and tablets to enhance the process of AAC. Due to its effectiveness, this has become an integral method for speech therapy for autism sufferers.

At times, poor development of other sensory functions can lead to speech disorders. For instance, poor eyesight or sense of sound can lead to disrupted communication. The brain receives erroneous information and decodes every signal in the wrong way. In such scenarios, <b to overcome this disease.

A speech therapist is a professional who will take you through a series of steps to improve your communication skills and eradicate or at least reduce your speech disorder. Apart from the medical steps involved, typically, a trained expert from any institution of speech therapy in Dubai will help you to deal with your speech problems by addressing the following situations:

This stage of speech therapy for autism and related diseases involve the practice of tongue and mouth movement for pronouncing a syllable correctly. The therapist guides you through what should be your respiratory habits when speaking a certain word. You are also taught about how much to open your lips to generate airflow.

Another term that comes in here is intelligibility. This is where other people are unable to comprehend what another person is speaking about. Through speech therapy treatment, this issue can also be resolved.

Stuttering is a condition where a person is unable to speak fluently and personal development can be one of the reasons for its cause. Speech language pathology states, for treating this, a therapist generally organizes one-to-one sessions for identifying the cause of development and treatment is meted out accordingly. Apart from fluency problems, stuttering can lead to tension in neck and shoulder muscles and may also affect other motor movements like arms and legs.

Many speech and language therapy specialists have opined that a person’s food swallowing habits can also lead to speaking disorders. Therapists have knowledge about all oral and respiratory muscle movements and they can detect if this is one of the root causes of your lack of fluency. They talk and teach you about tongue thrust, respiratory pattern and other related swallowing habits.

Most speech and language therapy for children involve developing their listening skills. Even adults have shown instances where they were suffering from communication-related disorders due to lack of proper listening skills. In such a case, a therapist generally conducts a series of sessions where a person is asked to listen and pronounce a set of syllables or replicate everything exactly after listening to something.

Attention, planning, memory and retention come under cognitive skills. At times, speech therapy treatment involves the development of this skill set to improve speaking fluency. Lack of attention attributes to one of the major reasons for a speech disorder. A physician, in such a scenario, sets tasks to enhance all these communication skills.

The thing is – speech disorders can arise due to any one of the above skill-set. It can either show itself as a child or may appear in early adulthood. Speech therapy in Dubai has taken huge leaps in the past few years and has brought in all the latest technologies to train its therapists and cure its patients.

Can you avoid Speech Therapy Services?

A disease with an immediate detrimental impact often goes unnoticed. A poor grade in class questions the child’s intelligence while a bad presentation filled with fillers is often attributed to lack of confidence in an adult. Speaking disorders happen due to a variety of psychological reasons and give rise to that many varieties of psychological problems.

Many speech and language therapy professionals have put in studies stating that both the disorder and its effect are inter-related. For instance, a person who has a speech disorder possesses lower self-confidence and esteem in front of another who is quite fluent. This lack of confidence gives rise to other speech-related disorders and the process becomes cumulative.

This person then starts to distance himself from human company and goes into depression. Again, lack of esteem effects brings about behavioral changes that are socially unacceptable. The basic social need is now not fulfilled and gives rise to deeper depression stages. Timely therapy can stop this.

Proper speech therapy treatment can prevent this disorder before it takes any other shape. At times, lack of fluency comes in, even when you do not possess any form of speech disorder. This can be fear of interaction, any past life experience or simple stress-related issues. It is completely curable. If not, you can still reduce and live with it and be successful with proper therapy. For real life examples, read the following section.

Is leading a normal life possible for a person with speech disorder?

Availing proper and authentic speech therapy services can put you right on track of your normal life. There have been recent instances where famous personalities have overcome their speech disorders and have gone on to do great things. Take these Hollywood actors for example.

As a matter of fact, recent statistics have shown that only 5 to 10% of the total human population can speak fluently without any hindrance. Winston Churchill, Sir Isaac Newton and even Alan Turing had speech disorders. Did this stop their careers from growing?

Human psychology remains to be the most undiscovered area even in this modern era of medical advancement. A speech disorder is one ailment that requires minimum medication and maximum counseling and therapies. There may be a host of service providers of speech therapy in Dubai, but only a few are professionals in this field and are acquainted with all the know-hows. An expert will:

Speech therapy in UAE ,mainly in Sharjah and Dubai has become more accessible and affordable now. Address the issues when they start to show signs and stop them right on their track. While it is easier for adults to identify their own problems, things become a bit complicated when a child is involved. Consult a therapist for speech and language therapy now and live a normal life with all the needs fulfilled. Express yourself fluently and succeed in every way.

My daughter started therapy at Austin Center when she was 2 years and 5 months old. At the time her response to name was limited and wouldn’t point to objects. Our major concern was her delay in speech. It is almost 3 months since she started therapy. Now she is pointing at objects and her response is a lot more spontaneous. Her speech has improved progressively. As a whole,her life  turned more optimistic since the start of the therapy.

My son is 4 years old.He had some behaviors issues and speech delay. Behaviors issues like not waiting for his turn and his speech was not clear. One day we came to know about Austin center from a pediatrician .we had our first session with Ms. Asha Susan and she gave us confidence about my son that his speech will become better soon. I and my husband started our son’s therapy sessions in November 2016. Day by day I saw so many changes from Asad. In Austin center for the first two months, my son had ABA and OT therapy. Later in January 2017, they started giving my son speech therapy too. I am very glad to say that his behavior has also changed. He is now started interacting with others We are happy with Austin center and therapist’s.They are doing a wonderful job. Now my son is having little behavior issue like he cries whenever he comes to speech session. I have positive hope that my son will join the mainstream school soon.With the help of Austin Center team. I would definitely recommend Austin Center to other parents who think their kids need genuine care.

Thanks to Austin- Vinod Deva 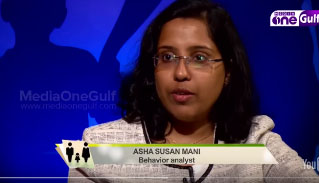